Part I
Though, I have lived in Goa for many years, I had not visited one of the spectacular monuments of Goa – the St. Augustine tower and Church complex. It is a part of the Churches of Old Goa, which are listed as UNESCO World heritage site.

This church in ruins, now, this may be the reason it has less popularity, compared to the world famous church of Old Goa, which is situated at a short distance from these ruins.
Here are 10 facts about St. Augustine tower and church:
1) The impressive 46 meter high bell tower facing east, has withstood the ravages of time and weather, it was a part of the façade of the magnificent church, St Augustine Church.

2) Situated on Monte Santo (Holy hill) at Velha, Goa, it has been standing tall for 412 years!
3) The bell from this church was first placed in the Fort Aguada Light House, where it remained from 1841 to 1871 AD. Finally it was permanently placed in the church of Our Lady of Immaculate Conception at Panaji in 1871 AD and it is still in working condition.
4) The tower and the church were completed 1602 by the 12 Augustinian friars who arrived in Goa in 1587.
5) The church had eight richly adorned chapels and four altars, and a convent.

6) The convent had a dining hall, guest house and Infirmary ( for first aid) which were very spacious. It also had vast dormitories and numerous cells and other structures which are now in ruins.


7) St. Augustine Church was probably the oldest churches built in Goa! It was built of laterite and was a four storied structure.

8) The name of the designer of this magnificent piece of construction is not known, but he is thought to have been Italian.

9) When it was completed in the 16th century, the grand Church was recognized as one of the three great Augustinian churches in the Iberian world, the other two being the Basilica of the Escorial in Spain, St. Vincente de Fora in Lisbon.
10) The church attached to the Augustinian convent was dedicated to Our Lady of Grace. This is what the Igreja da Nossa Senhora da Graca originally looked like (courtesy Baroque India by Jose Pereira)
Part II continued.....
Posted by Aparna Parinam at 3:00 PM 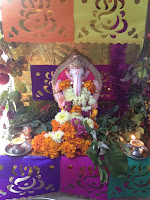